Songs for a New World is the first produced show by Jason Robert Brown (Parade, Bridges of Madison County). Representing a broad range of musical genres including pop, gospel and jazz, the songs are linked by a common theme that Brown says is about “the moment of decision. It’s about hitting the wall and having to make a choice, or take a stand, or turn around and go back.” Although set in a variety of times and places, the show poignantly expresses the hopes and challenges of our present reality.

YOU SHOULD BE SO LUCKY
by Charles Busch

You Should Be So Lucky is a contemporary Cinderella story set in Greenwich Village. It calls to mind the classic screwball comedies of the 1930s, with all of the eccentric touches that are Busch’s trademark. Christopher, a young, gay electrologist, helps an elderly millionaire, Mr. Rosenberg, after the old man faints in the street. Rosenberg, touched by the shy young man’s generous spirit, becomes his benefactor, until a surprise twist shakes up Christopher’s world.

It’s the year 2000 in Reading, Pennsylvania and a group of friends who work at the steel mill meet to decompress at the same run-down bar they’ve been coming to for over 20 years. But the steel mill is making changes, setting off a war between community and capitalism which destroys not only jobs but the relationships they thought would last a lifetime. Winner of the 2017 Pulitzer Prize for Drama, Sweat examines the very personal meaning of America’s key conflicts: the economy, race-relations, and politics.

A Doll’s House, Part 2 is set fifteen years after the end of Ibsen’s original play, when Nora walked out of her house and her marriage. While her husband Torvald continued to work and raise their family, Nora followed her own path. Now Nora has returned to home to face what she left behind. Can she still justify her actions to leave and fulfill her dreams? After all that has happened, will Torvald be willing to give her what she wants? A surprising and contemporary look at the lives we choose, and the ones we leave behind.

Auditions for Songs For A New WorldNews 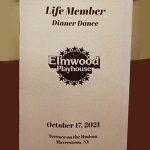