By elmwoodwebmaster
Posted September 8, 2022
In News
Cast of Elmwood’s Night and Day To Perform at Nyack’s Street Fair Sunday2022-09-082022-09-07https://www.elmwoodplayhouse.com/wdpr/wp-content/uploads/2021/12/elmwood-playhouse-75th-anniversary-header-logo.pngElmwood Playhousehttps://www.elmwoodplayhouse.com/wdpr/wp-content/uploads/2022/07/night-and-day-calendar.jpg200px200px
0

On the Main Street gazebo bandstand at the Nyack Septemberfest Street Fair at 3:00 p.m. on Sunday, September 11, the cast of Elmwood Playhouse’s production of Night and Day — Love Lost and Found through the Eyes of Cole Porter will perform a selection of songs from the Playhouse’s inaugural show of its 75th season. Selections will include iconic tunes such as “From this Moment On,” “In the Still of the Night,” “My Heart Belongs to Daddy,” and “Friendship.”

Come on down and hear a concert preview of the show! And be sure to visit Elmwood Playhouse’s street fair booth on the corner of Park and Main.

After you hear the amazing talent of our cast– Grace Callahan as Tilly, Michael Del Valle as the Butler, Candace Lynn Matthews as Linda, Damon Quattrocchi as Charles, and Jason Summers as Donald–you’ll want to get tickets for the full show!

Night and Day—Love Lost and Found through the Eyes of Cole Porter will be performed at Elmwood Playhouse located at 10 Park Street in Nyack, New York from September 16 – October 8, 2022. Shows are Fridays and Saturdays at 8 p.m., Sundays at 2 p.m. and Thursday, October 6 at 8 p.m.

With music and lyrics by Cole Porter, the show is based on an idea by Robert Cacioppo, and was conceived and written by Robert Cacioppo and Artie D’Alessio, with musical arrangement by Victoria Casella. This production is the show’s New York Metropolitan area premiere and is presented by special arrangement with the Cole Porter Estate. Directed by Alan Demovsky, Night and Day—Love Lost and Found Through the Eyes of Cole Porter is choreographed by Steven Dougherty with musical direction by Victoria Casella. 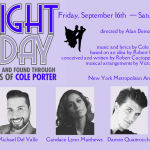 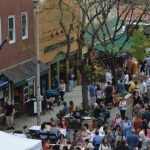