Another creative venture presented by Elmwood Playhouse for the public is the upcoming Virtual Monologues Project, scheduled for sequential release on Mondays, Wednesdays and Fridays beginning Friday March 12th with the last monologue released on Friday April 2nd. Presentations can be viewed on Elmwood’s Facebook page and Youtube channel. The project, spearheaded by longtime Elmwood member and director Michael Edan, is designed to bring entertainment to the community by showcasing local playwrights using an array of talented local actors in live taped performances. 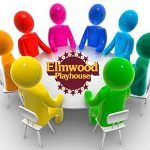 Calling for Candidates for the Board of Directors electionsNews