On Sunday June 16th, Operations Manager Evelyn Russo and Board President Steve Taylor headed to Gettysburg, PA to attend the Community Theatre Management Conference presented by the American Association of Community Theatres. For three days Evelyn and Steve participated in roundtable discussions and breakouts that covered virtually everything about running a community theatre, including ticketing systems, marketing, budget, fundraising and season selection. Attendees came from as far away as Portland, Oregon and Munich, Germany, and lots of ideas were brought back to Nyack.

Steve stayed on for the rest of the week (on his own dime) for AACTFest2019, a whirlwind of workshops, performances and networking opportunities. Elmwood was represented in the design competition by Ralph Felice’s beautiful Morning’s at Seven set, and by Janet Fenton’s dwarf costumes from Vanya and Sonia and Masha and Spike. And Steve not only made it to the finals in the monologue competition, but also won a free MTI performance license.

The next national conference is in 2021 in Louisville, KY. Let’s start planning now to send a contingent! 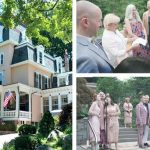 Thank You from our Elmwood President, Steve TaylorNews 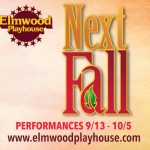 Elmwood Playhouse Announces Cast and Crew for “NEXT FALL”News