On Sunday, January 15, with temperatures and wind chills in the lower 30s, a robust crowd of 300+ people rallied in front of the Phyllis B. Frank Rockland Pride Center in Nyack to protest the act of hate that happened there on Wednesday Jan. 11. Under cover of darkness, a homophobic message was spray-painted on the wall of the Pride Center, which is covered with photos of local LGBTQ+ neighbors, politicians, teachers and children. It was an act of hostility that the Pride Center took seriously and called for the support of the community to protest it in a rally called “Stand With Pride, We’re Here.”

Elmwood Playhouse put out a statement which said in part, “We cannot destroy hatred, but we can be a community that speaks up against it at every opportunity.” This was an opportunity to show the Community aspect of Elmwood Community Playhouse, and several board members and members of the Playhouse were present at the rally to show support, joining the voices of Pride Center Executive Director Brooke Malloy, members of her staff, local and Congressional politicians, religious leaders, and a great cross section of the LGBTQ+ community, friends, and families to protest this and other acts of hate. On the day before Dr. Martin Luther King Jr.’s birthday, we were proud to stand with the Pride Center and remember King’s words: “Whatever affects one directly, affects all indirectly.”

The Lifespan of a Fact Continues Its Run at Elmwood PlayhouseNews 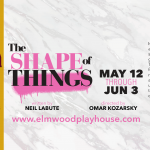