The recording of the Public Domain Players’ readings of “Mine Eyes Have Seen” (one of the first scripts written by an African-American playwright that’s still available to us) and The People by Susan Glaspell is now available at https://youtu.be/NegPcFwuQ3Q and on Elmwood’s YouTube page.

Both plays were written toward the end of WWI. “Mine Eyes Have Seen” presented the question of what socially disadvantaged people owe to their country when the country doesn’t seem to offer very much to them. “The People” examined how a failing newspaper would serve the people best. 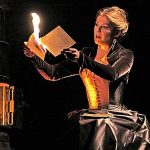