“Sherlock Holmes and the Adventure of the Speckled Band” will be opening at Lyndhurst Manor on Friday, November 16th playing through Sunday, December 9th (please see the website for specifics). The Red Monkey Theater Group in conjunction with M&M Performing Arts produce this enjoyable Sherlock Holmes puzzler in different rooms of Lyndhurst Manor (and just touring the Manor itself is a treat), while the audience is guided along.

But, act fast! 8 of the 18 performances are already sold out, and another 3 performances only have one seat left! It’s elementary that this is not a show to be missed! 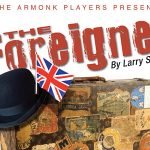