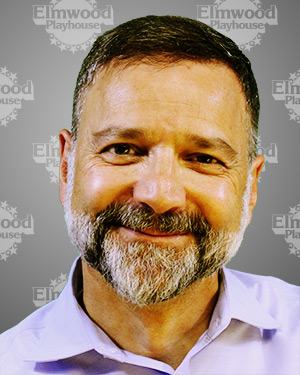 Rich is glad to be able to be back at Elmwood for a ‘Live Production’ once again. He is very happy to be asked to fill in some roles and wants to thank Melinda, Christine & Jillian for this opportunity. He was previously seen here on the boards of Our Town as Howie Newsome and Joe Stoddard. He has been the props designer for Elmwood productions of The Little Foxes, She Loves Me, Death of a Salesman and La CageAux Folles. Rich has also designed props for several shows at his home theater, Bergen County Playhouse (BCP), including Cabaret (Perry Award recipient), Chapter Two, George is Dead, The Talking Cure, and The Typists, as well as for numerous workshops. He has also had several roles on stage at BCP as well, including the Royal Herald in The Emperor’s New Clothes, Patrolman Vanelli in the Night Watch, in A View From the Bridge and part of the ensemble in three holiday shows.